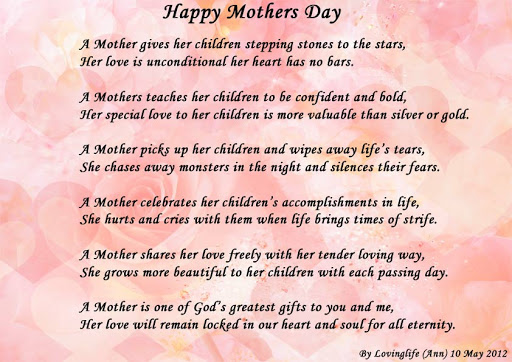 THOUGHT OF THE DAY

• A mother’s praise for her child!
1 Samuel 2:1-10 AMP
[1] Hannah prayed and said, “My heart rejoices and triumphs in the LORD; My horn (strength) is lifted up in the LORD, My mouth has opened wide [to speak boldly] against my enemies, Because I rejoice in Your salvation. [2] “There is no one holy like the LORD, There is no one besides You, There is no Rock like our God. [3] “Do not go on boasting so very proudly, Do not let arrogance come out of your mouth; For the LORD is a God of knowledge, And by Him actions are weighed (examined). [4] “The bows of the mighty are broken, But those who have stumbled equip themselves with strength. [5] “Those who were full hire themselves out for bread, But those who were hungry cease [to hunger]. Even the barren [woman] gives birth to seven, But she who has many children withers away. [6] “The LORD puts to death and makes alive; He brings down to Sheol (the grave) and raises up [from the grave]. [7] “The LORD makes poor and makes rich; He brings low and He lifts up. [8] “He raises up the poor from the dust, He lifts up the needy from the ash heap To make them sit with nobles, And inherit a seat of honor and glory; For the pillars of the earth are the LORD’S, And He set the land on them. [9] “He guards the feet of His godly (faithful) ones, But the wicked ones are silenced and perish in darkness; For a man shall not prevail by might. [10] “The adversaries of the LORD will be broken to pieces; He will thunder against them in the heavens, The LORD will judge the ends of the earth; And He will give strength to His king, And will exalt the horn (strength) of His anointed.”

• A mother’s Love!
Exodus 2:3 AMP
[3] When she could no longer hide him, she got him a basket (chest) made of papyrus reeds and covered it with tar and pitch [making it waterproof]. Then she put the child in it and set it among the reeds by the bank of the Nile.

• A Mother’s remembrance!
Luke 2:19 KJV
[19] But Mary kept all these things, and pondered them in her heart.